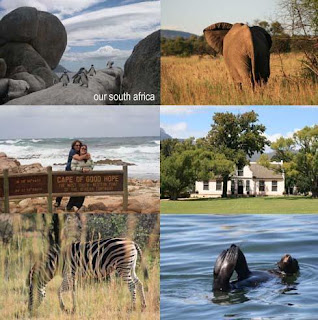 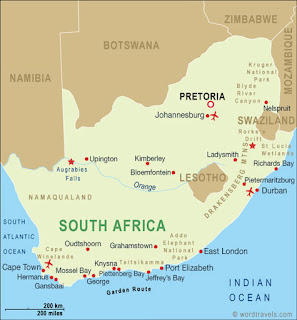 Filling the earth with the knowledge of the Lord as the waters cover the sea!
Last January I had the privilege of preaching in South Africa at an African Pastor’s Conference (APC). I have been invited to attend once again this coming January. While I am still praying and seeking the Lord’s will in this invitation I would ask each of you to pray with me that the Lord would continue to bless the conferences and raise up an army of godly men filled with passion and love for Christ.
We have been supporting conferences in South Africa, Brazil, Europe and Great Britain. My prayer is that the doctrines of justification by faith alone and the doctrines of God’s sovereign grace will be spread throughout the earth for the glory of the Lord.
Below is a report of the African conferences that I was able to attend and which we supported financially. I trust you are all encouraged by reading this report.
A Report on the APCs During January 2009
A report by Gary Morrison

Six African Pastors’ conferences were held in South Africa during January. My portfolio was to see that these conferences ran smoothly and that included organizing the display of the books which are sold at subsidized prices thereby bringing very considerable advantage to the pastors. This latter responsibility was made a pleasure by diligent workers at each conference who know the book trade. Cornerstone Baptist Church, Bolton, generously and whole-heartedly supported me in these travels in sunny South Africa. My first pastorate was in Mandini, Kwazulu and with that background I have great sympathy for the needs of African pastors who live in an economic climate very different to ours.
The first conference was held at Mseleni near the border between Mozambique and South Africa, Pastor Choolwe Mwetwa (Central Baptist Church, Chingola, Zambia) spoke very challengingly on ‘The marks of faithful ministry’, and Pastor Raymond Zulu, with the advantage of preaching in his mother tongue, soared wonderfully on the theme, ‘The Word of God as our sure foundation’.
Our second conference at Koinonia Conference Centre was nearby the town of Hillcrest which in turn is not that far from the city Durban. The Speakers included Choolwe, Raymond, Dennis Hustedt (Utah, USA) and myself. The response was encouragingly very positive. Such is the increasing interest and edification that the pastors are calling for an extension to this work to reach the youth and from them so seek to build up a future body of able ministers of the Gospel. We will have our work cut out to wrestle with this challenge and act positively.

Our third stop was in the Eastern Cape in at the city of Port Elizabeth, where Dr Paul Stoltz organized the three day conference. Pastor Bob Dickie (Berean Baptist Church in Flint Michigan USA) also expounded the awe inspiring subject of Worship. We also had an outstanding Q & A session. Some interesting topics were discussed including the role of women in ministry. This cropped up at most of the conferences. It seems to be a recurring theme that may need to be addressed sensitively in the future.
The fourth conference was near the beautiful city of Pretoria. This time the speakers included Pastor Irving Steggles (Birchleigh Baptist Church, Kempton Park). He spoke on revival and delivered the conference sermon (’Motivation in the Ministry’). The conference was a tremendous success under the very capable leadership and organizational skills of Irving Steggles. The Book table ministry was also a great blessing here. The three days and two nights, including six meals cost each person the equivalent astounding sum of 70 Rand (£5.00). This is an admirable demonstration on just how far money given by churches in both the USA and the UK can go towards financing more APC’s in future years.

The fifth conference was in the large Free State town of Welkom. This once rich gold-mining town is now not far from poverty. Even the local fire engines have been repossessed by the manufacturers. The local CESA (Church of England in South Africa which is a reformed denomination) minister, George van der Westhuizen, acted as host to the conference at his church building. There was tremendous response to the preachers Choolwe and Raymond. On a personal note heartbreak and challenge came to me the next day when the three of us visited Morning Star, a crèche for 85 local HIV positive children. What an inspiring work is done by the ladies there, especially Joan Adams who is responsible for running it.
Finally the last of the conferences took place at Newcastle. This was a first time event and was capably organized by pastor Paul Jacobs. Here we saw demonstrated what can be done when a whole church supports a conference like this. This practical backing came from the Newcastle Baptist Church. Apart from the books hardly any subsidy is needed when this takes place. Some were disappointed inasmuch that they did not have enough time to secure enough money to purchase more of the discounted books that were available. In Newcastle they all wanted us to stay on for a second day. Lord willing next year we will.
Posted by Pastor Robert L. Dickie at 4:16 PM