Many years ago Dean Alfange, a Greek immigrant from the Ottoman Empire, wrote what he called, “His Creed.” This creed was quoted anonymously in 1985 in the newsletter of the National Foundation for the Study of Religion and Economics, September/October. This creed, well written, thought provoking, and today more relevant than ever speaks to us about the vanishing generation of Americans.

“I do not choose to be a common man. It is my right to be uncommon—if I can. I seek opportunity—not security. I do not wish to be a kept citizen, humbled and dulled by having the state look after me. I want to take the calculated risk; to dream and to build; to fail and to succeed. I refuse to barter incentive for a dole. I prefer the challenges of life to the guaranteed existence; the thrill of fulfillment to the stale calm of utopia. I will not trade freedom for beneficence nor my dignity for a handout. I will never cower before any master nor bend to any threat. It is my heritage to stand erect, proud and unafraid; to think and act for myself; enjoy the benefits of my creations; and to face the world boldly and say, ‘This I have done.’ All this is what it means to be free.”

This quote represents a generation that is passing away. Where did they go? How is it that the America I grew up in is so different today? I was thinking of my father the other day. Dad has been gone for many years now. O how I miss him. He would not recognize the America his children and grandchildren are living in now. I would love to hear his thoughts.

The scourge of this present generation is that so many feel entitled. Few, growing up today, have a strong work ethic.  Honesty, loyalty, and discipline are vanishing virtues. Most do not know what was meant by the phrase, “The Protestant Work Ethic.” Character, telling the truth, standing alone, sacrifice, and personal honor seem like dreams of a by gone era.

Perhaps, what made the America that my father grew up in so wonderful, in so many ways, was the influence of the Christian worldview that is now under attack and is being systematically dismantled. Political Correctness, Secular Humanism, the New Atheism, and a host of other weeds are choking the flowers in what used to be a beautiful garden.

I think of a verse of Scripture that speaks to me these days. Queen Esther was asked by her uncle to stand up in the defense of the Jews who were under a serious threat from a wicked man. Her uncle spoke wise words to the new queen, “For if you remain completely silent at this time, relief and deliverance will arise for the Jews from another place, but you and your father’s house will perish. Yet who knows whether you have come to the kingdom for such a time as this?” Esther 4:14.

The Road That Leads To Heaven 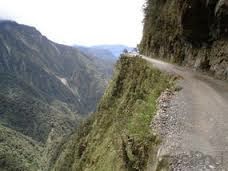 The Road That Leads To Heaven

Jesus said to His disciples, “If anyone desires to come after Me, let him deny himself and take up his cross daily, an follow Me,” Luke 9:23.

Isaiah says to us, “A highway shall be there, and a road, and it shall be called the Highway of Holiness. The unclean shall not pass over it.” Isa. 35:8

Those who desire to reach Celestial City, as John Bunyan calls it, must come by the road that Jesus and the Scriptures have pointed us to. Those who make it to glory (because of the sovereign grace of God) will be able to say like Robert Frost, “Two roads diverged in a yellow wood. And I, I took the one less traveled by and that has made all the difference.”

The Lord tells us in Ezekiel 18:21, and 31, “But if a wicked man turns from his sins which he has committed, keeps all My statutes, and does what is lawful and right, he shall surely live, he shall not die.” “Cast away from you all transgressions which you have committed, and get yourselves a new heart and a new spirit. For why should you die, O house of Israel?”

It is God’s grace alone that gives us a new heart and a willingness to take up the cross and set our feet on the Calvary road.

Bishop J. C. Ryle from England made the following observations of the life of those who found the right road to glory.

“This is the road that saints of old have trodden in, and left their record on high.

Thoughts on Atheism and the Ken Ham Debate

There are many serious problems with the worldview of the atheist. For example, there are a  number of questions that an atheist cannot answer.  Let me list a few of these questions:

1. How does an atheist explain the existence of immaterial thoughts, logic, and the process of cognitive reasoning? When an atheist argues against God, he must borrow from the Christian worldview and use non-material thoughts and logic to prove that there is nothing non-material in the universe. The atheist is caught in a major contradiction.

2.  Where did the material come from that was used in the big bang?

3. What caused the big bang?

4. How does beauty, order, symmetry, precision, design, and intricate complexity come into being from a chaotic blast of confusion and an explosion of randomness? Pieces of an exploding grenade do not revolve in mathematical alignments or orbits-- they scatter in random directions.

5. How does the atheist explain the origin of the universe? Does he not exercise as  much faith as the theist?

6. On what basis can an atheist say that any behavior is morally right or wrong? If there are no moral absolutes, what then gives him or anyone the authority to make laws or pass judgements?

7.  If there is no God, can anything be morally right or wrong?

8. If there is no God, how can an atheist find true meaning and purpose for life?

9. How does the atheist explain the devastating impact his worldview has had on history?

10.  How do you explain the presence of evil in the world?

12. Where did the information come from that is programmed in the DNA cell? There is more information in our DNA than in a vast library.

14. How do you explain the first two laws of thermodynamics?

A book you must read is God Does Exist by Michael A. Robinson. We have Sye Ten Bruggencate coming to our men's retreat. I trust you will make every attempt to come.

Pastor Dickie
Posted by Robert Dickie at 3:26 PM No comments:

My Second Interview With Craig Carlton

I have been blessed to have a number of godly elders here at Berean Baptist. Craig Carlton has been one of them. This is my second of three interviews with Craig. I trust it will be a blessing to all of you.

We are going to have another snow storm this weekend! If church must be called off again I will hang a shingle on my study door that says, "Closed for the winter!" Wow! I have never seen it like this before!

Sunday's message in James will be dealing with the contrast between the wisdom of God that is from heaven and the wisdom of man that is from hell. Pray for me that this important topic will be a help, a blessing, and a warning to all who attend and worship with us this Sunday. Here are a few of my notes for this message. Our text is:

“Who is wise and understanding among you? Let him show by good conduct that his works are done in the meekness of wisdom. 14 But if you have bitter envy and self-seeking in your hearts, do not boast and lie against the truth. 15 This wisdom does not descend from above, but is earthly, sensual, and demonic. 16 For where envy and self-seeking exist, confusion and every evil thing are there. 17 But the wisdom that is from above is first pure, then peaceable, gentle, willing to yield, full of mercy and good fruits, without partiality and without hypocrisy. 18 Now the fruit of righteousness is sown in peace by those who make peace.” James 3:13-18

Over the years I have had a few people come into my study to meet me over some issue and at times they came with anger, rage, outbursts of temper, arrogance, and argumentative spirit, harshness, without a willingness to yield or die to self, no mercy, no evidence of the fruit of the Spirit, and filled with partiality. Every pastor has met professing Christians like that. And then how many times have we gone into committee meetings, annual church meetings, deacons meetings and met men and sometimes women who carried on in such a shameful way that we were left wondering if we were presiding over a group of people that were demon possessed. These things ought not to be and must surely grieve the Holy Spirit.

Another observation made here from our text is how  vastly different Christianity is from Islam. James tells his readers to demonstrate and prove they have wisdom by purity of life, being full of peace, being gentle, having a spirit willing to die to self and to be full of the fruits of righteousness. How different this is from the Koran that teaches it followers to slay the infidels wherever you find them, lay in wait and ambush them, persecute them and force them to convert.

May the Lord give us the wisdom that is from heaven and may we be filled with the Holy Spirit in all that we do. Lord willing I will see you all on the Lord's Day!


Posted by Robert Dickie at 2:25 AM No comments: