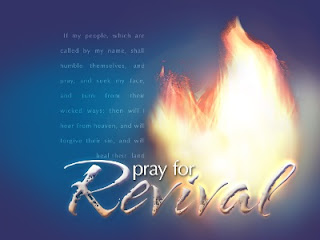 Dr. Edgar Andrews will be with us this Sunday. Dr. Andrews is the former chairman of the science department from the University of London, England. Professor Andrews has been recognized as one of the top physicists in the entire world. We are very privileged to have him as our guest speaker once again. I have been greatly blessed over the years for the deep and personal friendship that Dr. Andrews has given to me. Much of my ministry has been shaped and inspired by his spiritual mentorship. I trust that all of you will be blessed by his ministry with us this weekend.

Our office staff is taking a trip to Tawas for a dinner cruise out to Charity Island. Dr. Andrews will be our special guest and will speak to the staff on Saturday morning.

Last week I spoke at a Leadership seminar for the Team in Louisville, Kentucky. I quoted a poem in my Sunday message and was asked to put that poem on the blog. I trust that you will all be blessed by the words of this poetic rendition of a revival that was recorded many years ago in Texas.

The Ninety Men In The Marshall’s Den

“I’m going to preach and I’m going to teach, to the ninety men in here, (while a storm was raging outside). Of the words of love, from the throne above, and his words rang out loud and clear. I’ll preach for you of a Savior true, and a happy home on high. Where the angels dwell, where all are saved from Hell, and where the righteous never die. And he said a prayer in the prison there, as the ninety bowed their heads, to the old Choctaw and the Chickasaw, to the whites and the blacks and the reds. He prayed for the chief in his unbelief, and the dark highwayman bold, to the robber crew and the bandits too, to the criminals young and old. And he sang a hymn in the prison grim, he sang, “Turn sinner, turn.” “It’s not too late to reach God’s gate while the lamp holds out to burn.” And then from his bed, from the black and the red, a broken outlaw too. With trembling steps to the parson crept, and he shivered as all in the cold. As the lightning’s flashed, and thunders crashed, showed his features pale and stern, as he bowed his head he solemnly said, “I am resolved to turn.” And it seemed to me I will never see, a scene so great so grand, as the white and the red and their darkened friends around that Christian one did stand. While the light came down, like a silver crown, for the promise came to all. For the ninety men in the marshal’s den heard only the Savior’s call. And the lightning’s flashed, and the thunders crashed, showed their features pale and stern. As they all bowed their heads they solemnly said, “We are resolved to turn.”
Posted by Pastor Robert L. Dickie at 10:39 PM