This past weekend I was speaking in St. Louis, Missouri. On Sunday I took as my text Luke 13:1-5 and spoke on the subject of Repentance. There were approximately ten thousand people present and the Lord seemed to come down among us. Whatever results we received I will give all the glory to the Lord.


This Sunday at Berean Baptist in Grand Blanc, Eric Stewart will be preaching in our first service and Chris Smith will be speaking in the second service. I will be away speaking to a large Spanish group in Palm Springs, Ca. Your prayers and intercessions will be greatly appreciated. We will be giving out the booklet Authentic Christianity 101. This is a booklet that both defends and declares the gospel of God's sovereign grace.


Let us not forget that these days are the opportunities for all of us to shine for our Savior and God Jesus Christ the Lord. May we be faithful in exalting Him and proclaiming His gospel to the ends of the earth. I will be back in the pulpit at Berean on March 9th and we will be having communion on that Sunday as well.


God bless you all and may we remain faithful in the service of our King!
Posted by Pastor Robert L. Dickie at 3:25 PM 2 comments:

This Sunday, February 17th, Dewi Higham will be with us for the second service at 12:00 P.M. Dewi is a great friend of our church. Dewi pastors the Tabernacle Church in Cardiff, Wales. Every time I hear him speak, my heart is always blessed. Plan to come and hear him share the precious Word of God.

I plan to speak on the subject of the New Birth out of John chapter 3. My great concern is that many people may be trying to live the Christian life while having never been born again. This message will be given during the first service at 10:00 A.M. I am praying that the Lord will speak to all of our hearts and reveal to each of us our need of Christ. My prayer every Sunday is this: "O Lord, in mercy, open the eyes of our souls that we might see our need of Jesus." God bless you all. As you get ready for the Lord's Day, read John 3:1-18.

I am currently preaching and teaching through the book of Hebrews on Sunday afternoon. I highly recommend that you read Dr. Edgar Andrew’s book on Hebrews called A Glorious High Throne published by Evangelical Press.

The book of Hebrews shows us the superiority of Jesus over all the Old Testament types and shadows. It is my prayer that you will all come away from this study with a new and deeper appreciation for both the Word of God and for the Lord Jesus Christ. Each week as you come to church read the section in Dr. Andrew’s book that we will be looking at. This will help you prepare to hear and receive the Word more powerfully to your soul. My prayer is that this study will bless and impact all of us at Berean. James reminds us, “But be ye doers of the word, and not hearers only, deceiving your own selves.” This Sunday we will be looking at Hebrews 2:5-9. Focus your attention on two things here:

1. “What is man that thou art mindful of him?” What does this teach us about Ourselves and about Christ?

2. What did the author mean in verse 9 when he said, “…that he by the grace of God should taste death for every man?” Does this verse teach a universal atonement?

God bless you as you read and prepare for Sunday’s message.
Posted by Pastor Robert L. Dickie at 1:07 PM No comments:

The Book That Changed History 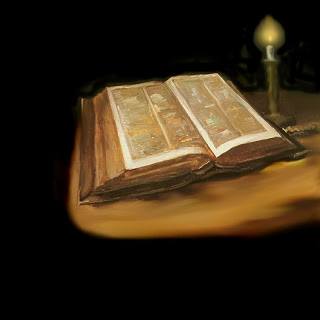 It is subversive literature. It has led to the overthrow of governments, sparked mass migrations across oceans, and more than once changed the course of history.

Governments - from the 16th-century English monarchy to the Communist Soviet Union - have gone to great lengths to restrict or even prevent its printing and distribution. Yet it has outlasted its enemies. It is the most popular book ever printed. No other has been translated into so many languages and few have had such impact on the development of those languages.

It is, of course, the Bible, portions of which have been translated into 1,946 of the 5000 languages of the world. This includes 318 languages into which the entire Bible has been translated. No other book even comes close to these numbers.

The collapse of Communism in Eastern and Central Europe has led to an unprecedented hunger for the Bible. In China, the lifting of restrictions by the government have led to the printing of 3 million copies of the Bible in Chinese. Bible publishers expect that Cuba will be one of the next strong fields of interest as that nation redefines its freedoms in the 1990s.

The interest of individuals in the Bible has often changed the course of history. Cultural historian David Hall of Harvard University argues that "the history of spirituality in Europe and America coincides closely with the printing of the Bible and its dissemination."

The work of a 14th century monk, John Wycliffe, did much to reform the political structure of England. He laid the foundation of reform of not only the Church but also the State. He resolved to introduce the common people to the New Testament by translating it into the vernacular of the Saxon peasants.

Before the 15th century, every Englishman who could read was able to question the teachings of the Catholic Church with regard to both civil and ecclesiastical government. Because of the perceived threat of Wycliffe's followers, the Lollards, who distributed and taught from English New Testaments, the Catholic Church banned translation of the Bible in 1408. The only copies that continued to exist in English were hand copies of the Wycliffe originals.

In the 1440s, Johannes Gutenburg began experimenting with novel, mysterious ways of approaching printing. Skilled in engraving and metal working, Gutenburg invented movable typeset and printed 200 copies of the Latin Bible. By the time Martin Luther was born in 1483, Germany had several large printing presses capable of printing hundreds of books at a time.

In 1521, William Tyndale, an Oxford scholar, began to translate the Bible into English. He did so because he was shocked to find that the people of England were so scripturally illiterate. Tyndale translated the entire Bible into English, printed copies of his version at Antwerp, and illegally smuggled the Bibles into England. In 1535, he was betrayed by a fellow Englishman and was burnt at the stake. His last words, reportedly, were "Lord, open the King of England's eyes!"

Consider that in 1525 in northern Germany, only 5 percent of the population was literate. Yet 150 years later in New England, 95 percent was literate. This great advance was the result of the Protestant Reformation which began to dominate the religious life of northern Europe. The basis of the Reformation was Martin Luther's teaching on the Priesthood Of All Believers: "Every Christian is a Priest before God and is capable of interpreting the Bible for himself with the aid of the Holy Spirit." Luther was also responsible for translating the entire Bible into the German language.

In turn, every Christian wanted to own a Bible and felt responsible to learn to read in order to more effectively commune with God. The result of this teaching brought on what some scholars believe to be the highest literacy rate of any society in the world: Puritan Massachusetts of the colonial period (1620-1775).

It may surprise some to know that the Puritans, although never a large group, have done more to influence the shape of government in the world than any other group of people in modern history. The Puritans were the architects of a new form of government - Christian self-government with union - which later became the basis for America's form of government. This was the end result of the Puritan's belief that the Bible holds principles that are applicable to every area of human life.

The Book That Has Survived Its Enemies

The Bible, like no other book in history, has withstood vicious attacks from its enemies. Many have tried to ban it, burn it and outlaw it ... from the days of the Roman emperors to the present-day tyrant-dominated nations.

Sidney Collett, in All About the Bible, says, "Voltaire, the noted French infidel who died in 1778, said that in one hundred years from his time Christianity would be swept from existence and passed into history. But what has happened? Voltaire has passed into history, while the circulation of the Bible continues to increase in almost all parts of the world, carrying blessing wherever it goes.

"For example, the English Cathedral in Zanzibar (present-day Tanzania) is built on the site of the Old Slave Market, and its communion table stands on the very spot where the whipping post once stood! The world abounds with such instances ... As one has truly said, 'We might as well put our shoulder to the burning wheel of the sun, and try to stop it on its flaming course, as to attempt to stop the circulation of the Bible.' "

Concerning the boast of Voltaire on the extinction of Christianity and the Bible in 100 years, Geisler and Nix point out that "only 50 years after his death the Geneva Bible Society used his press and house to produce stacks of Bibles." What an irony of history!

In 303 A.D., Diocletian issued an edict to destroy Christians and their sacred book: "an imperial letter was everywhere promulgated, ordering the razing of the churches to the ground and the destruction by fire of the scriptures, and proclaiming that those who held high positions would lose all civil rights, while those in households, if they persisted in their profession of Christianity, would be deprived of their liberty."

The historic irony of the above edict to destroy the Bible is that Constantine, the emperor following Diocletian, 25 years later commissioned Eusebius to prepare 50 copies of the scriptures at the expense of the government.

The Bible is unique in its survival. This does not prove that the Bible is true, but it does prove that it stands alone among books. A student seeking truth ought to consider a book that has the above qualifications.
Posted by Pastor Robert L. Dickie at 9:16 PM 2 comments: