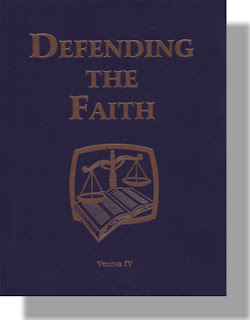 Why I Believe The Bible Is The Word Of God

I spoke at a conference last weekend in Orlando, Florida. One of the topics that I spoke on was the subject of why I believe the Bible is the Word of God. Here is some of the material that I covered. I trust that this encourages you and helps you in your defense of the gospel.

“All Scripture is given by inspiration of God, and is profitable for doctrine, for reproof, for correction, for instruction in righteousness: That the man of God may be perfect, thoroughly furnished unto all good works.”

A few years ago I went to Mississippi to watch the Southeastern Conference track championships. Mary and I had dinner after the meet with the team from Tennessee. Some of the female athletes were telling us about how several of their friends tried to sneak into a movie. They told us that as these students were attempting to sneak in, an attendant approached them and asked, “Excuse me, do you have tickets?” And one of the students replied, “No, we’re looking for the restrooms.” But the other student responded and said, “I can’t lie. We are trying to sneak into the movie.” I thought to myself, “Ah, an honest thief.” This is an oxymoron. An oxymoron is a figure of speech that contains two words or phrases that are seemingly contradictory. It is like saying a “tiny giant,” or a “good serial killer,” an “angelic devil,” or “an honest thief.” Here was a student that could not lie but had no scruples about stealing. The problem with all men is that we have these glaring inconsistencies about our ethics and morality.

The Law of God is like a net, a mirror, and an umpire!

The English word Bible comes from the Greek word biblia, biblia, and means books. The word Scripture comes from the Latin word scriptura and means writings of a sacred nature. Jesus Christ referred to the revelation of His Father by two different phrases:

In this text, the word inspiration comes from the Greek word “theopneustos”, and means God-breathed. What the apostle is telling us here is that the Word of God was given to us by the Lord and is His Word that was breathed into the minds of those who were used to write it. This is a very special book that we have in our hands today. Let us never take the Bible for granted. It is a God-breathed book.

1. The Bible claims to be the Word of the eternal and living God
more than 3000 times. (it contains the phrase, “Thus saith the
Lord”)
2. The Bible is self authenticating, i.e. it has its own intrinsic
authority.
a. The Bible has one theme from beginning to end.
b. The Bible has no contradictions within its pages even though it was
written over a period of 1500 years by 40 different authors.
c. The Bible contains both internal and external evidence
to authenticate and prove its divine message and truth claims.
d. There is no evidence that the text of the Bible has been corrupted
after 2000 years of being copied and passed on to each new
generation. The ancient Jews kept tabs on every letter, syllable,
word, and paragraph. The science of Textual Criticism demonstrates
the accuracy and the reliability of the Bible.
3. When the Bible was written, it was the only book at that time
that claimed to be the written revelation of the eternal God. Since then
there are two other books that also claim to be the Word of God, The
Koran and the Book of Mormon. But do these books have any
supporting evidence to verify their truth claims?

There is a wonderful old poem entitled--

Though the cover is worn, and the pages are torn,
And places bear traces of tears,
Yet more precious than gold is this book worn and old,
That can shatter and scatter my fears.
When I prayerfully look in this precious old book
As my eyes scan the pages I see,
Many tokens of love from the Father above,
Who is nearest and dearest to me.
This old book is my guide, tis a friend by my side,
It will lighten and brighten my way.
And each promise I find, soothes and gladdens my mind,
As I read it and heed it today.

How do we know that this precious book is the Word of God? By this question we are trying to discover if the Bible is reliable, God-breathed, trustworthy, inspired, and indeed the living Word of God.

There are many skeptics who tell us that this precious old book cannot and should not be trusted. Skeptics such as:

1. Voltaire- a pseudonym of Francois-Marie Arouet a French skeptic.
2. David Hume- a Scottish empiricist philosopher and agnostic.
3. Karl Marx- a Jewish atheist who was a communist.
4. Sigmund Freud- an Austrian psychologist and atheist.
5. Friedrich Nietzsche- a German philosopher and atheist.
6. George Santayana- an American philosopher and poet and atheist
who held to the notion that to believe in anything, including self is irrational.
7. Richard Dawkins- British atheist and author who is making an all out attack on the
Bible and Christianity.

Our Theme: Five Ways To Demonstrate That The Bible Is The
Word Of God

Our Outline:
I. Prophetically
II. Historically
III. Scientifically
V. Morally
V. Dynamically
If you would like to hear the full message on this text I plan to preach on this point this Sunday at our second service. You can listen to the message by clicking on our online sermons at Allgrace.com
Posted by Pastor Robert L. Dickie at 12:02 PM No comments: 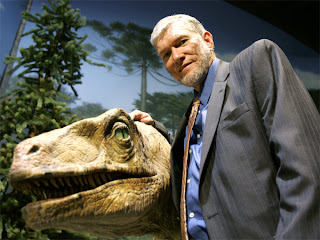 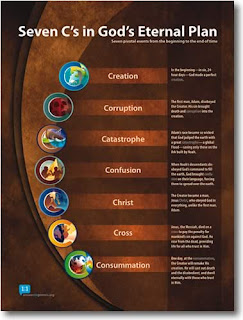 Was A Great Success!

I want to praise the Lord for the wonderful conference that we had at Berean Baptist Church this past weekend of May 17th. We were privileged to have had with us Ken Ham from Answers In Genesis. The conference was a tremendous blessing to all who attended. I was told we had well over 700 people in attendance! Not everyone could stay for all the services, but with many coming to the different services we probably had nearly a thousand different people throughout the day.

The important thing, however, is that those who came were given some tremendous materials and inspiration to help repair the foundation of the Christian faith that has been so badly eroded in our day. Ken Ham set forth the proper presuppositions that believers need to know when defending their faith to this Post-modern generation. The messages will be posted on our web sight at allgrace.com. You can listen to them by clicking on online sermons.

The one challenge I want to leave with our Church family is that we must not treat Sunday's like this one as a form of Christian entertainment. We need to be doers of the Word and not just hearers of the Word. This conference will be a great success if we each absorb the material and if we share what we have learned with others. This means keeping the information flowing, and continuing to invite people to Church and sharing the gospel with others. Ken Ham's messages were powerful and convicting. If you did not attend please listen to them.

I would also like to thank all the office staff that worked so hard to plan, organize, and to make sure that this conference was a great blessing to our Church family. We had a small army of volunteers and workers at Church on Sunday morning that did a marvelous job as well in serving around the Church. A special word of thanks goes to several of our elders who gave several thousand dollars to pay for all the expensesof the conference. Sacrificial giving for the glory of the Lord is laying up treasures in Heaven! From my heart I thank all those who served, who came, who gave offerings, and who invited others to join us for this special day.

God bless you all. 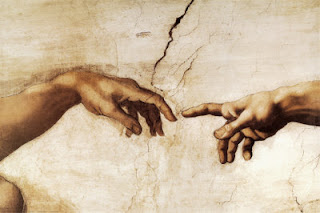 Please be praying for our upcoming meeting with Ken Ham from the Creation Museum in Kentucky!

Answers In Genesis Conference At Berean Baptist Church, May 17, 2009.

Ken Ham will be with us at Berean Baptist Church to share with our congregation and friends a seminar that will help us to bring reformation to our land by reclaiming the foundations of our faith which are based in the Bible. Ken Ham is one of North America's most popular speakers, best-selling authors and radio host. I want to invite all of you to attend and if possible to bring at least one person with you to hear this seminar.

The purpose of this conference is to help you to be able to answer some of the most-asked questions about the Bible! You will discover biblical truth and the reliability of the Scriptures. In this Post-Modern age, where the Bible is continually under attack, you will find your faith in the Word of God strengthened and enriched. Please plan to attend.

The topics of Ken's messages are: