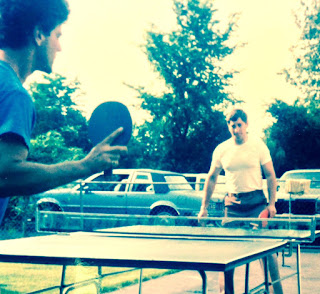 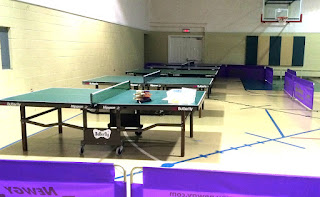 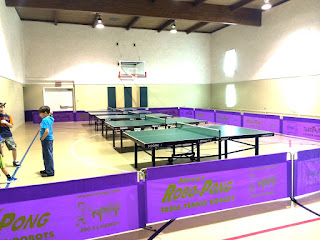 The picture on the top is one of me many years ago playing ping pong outside at a friends home. The pictures on the bottom are pictures of our Table tennis club at Berean. It is a real joy for me to work with our young men and to have the opportunity to teach them the basics of table tennis.

I have a book I have put together for our club members with some basic info on Table Tennis. This is my special gift to each of our young men who attend the club. The book is being printed right now and will be here in a week or so.

We have been blessed to have several very accomplished players join us give lessons and demonstrations to our young men. Scott Endicott, a Michigan state champion on numerous occasions came out to give a demonstration and hit with some of the guys. Mike Casey, another very good player has come out on several occasions to help with our club and Jim Dawson who heads the Flint Table Tennis Club is giving our boys lessons. This opportunity has given me a wonderful time with the young men to have input in their lives and to encourage them to walk with God and to live for Christ.

The Word of God tells us that what ever we do we should do it for the glory of God. That even includes our recreation and hobbies. 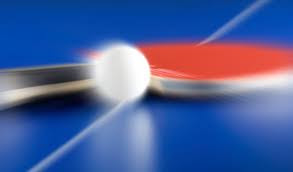 Pray for the young men at BDA TT Club and pray for me to be able to continue to exhort these young people to be all they can be for Christ.

Don't forget that we are having our Men's retreat next weekend. These retreats have been amazing times of fellowship and challenge from the Lord. Pray for our guests from Brasil that the Lord will use them in a mighty way for His glory.


Posted by Robert Dickie at 2:40 PM No comments:

The President's Visit to a Mosque

Thoughts On The President’s Visit
To A Mosque

I cannot read our President’s mind so I have no real idea as to what his motives were in visiting a Muslim mosque this last week. The fact that this mosque has numerous ties to radical jihadists makes me wonder why he was not more careful in choosing a place to make a speech. I presume that the President was trying to sell the public on the fact that Muslims make good neighbors and therefore, if we let several hundred thousand refugees into our country, we have nothing to worry about. The tone of the President’s speech and some of the concepts he was peddling were disturbing, to say the least. To chasten Christians and the general public about so-called increases in anti-Muslim incidents in our country is astonishing given the fact that the rise of anti-Semitic and anti-Christian violence is exploding all over the Islamic world. I did not hear our President reproach Islam for its vast network of violence it is spreading across the globe.

The fact remains today that we have in the West enormous numbers of Muslims pouring into our countries. These new immigrants and refugees have a religion and worldview that does not accommodate easily to the host country where they arrive. Many Imam’s will try to assure us that there is little difference between Islam and the Christian West. This is not the case. When I have opportunities to speak to Muslims I ask them this series of questions to allow them to make clear to me where the differences really lie between Islam and Christianity. Here are the questions I ask:

1. Do you believe the Bible, as we  have it today, contained in the Old and New Testaments is the authoritative, inspired Word of God without error? Muslim answer: No

2. Do you believe that Jesus Christ is the Son of God? Muslim answer: No

3. Do you believe that Jesus Christ died on the cross for our sins? Muslim answer: No

4. Do you believe that Jesus Christ was raised from the dead? Muslim answer: No

5. Do you believe that Christians who do not believe in Islam or Mohammed will go to Paradise when they die? Muslim answer: No

6. Do you believe in the Holy Trinity? Muslim answer: No

7. Do you believe Christians have the right to examine the credentials of the prophet Mohammed and criticize him if they conclude his life, beliefs, or behavior is a serious cause for concern? Muslim answer: No

8. Do you believe  that non-Muslims will go to Paradise? Muslim answer: No

9. Do you believe that Sharia law should not be practiced in the United States and that the U.S. Constitution and American law alone should be followed? Muslim answer: No

10. Do you believe that non-Muslims have the right to examine the truth claims of Islam and openly reject and critique it if they find it in any way problematic? Muslim answer: No

11. Do you believe that freedom of speech allows non-Muslims to speak their minds about Islam and its prophet? Muslim answer: No

12. Do you believe that women should have equal rights with men under the law? Muslim answer: No

Regardless of what our President says, Muslims have a belief system and worldview that is diametrically opposite to anything in the West.  That many Muslims are peaceful does not erase the fact that many others are not. This is the problem. The jihadists and those who are committed to the violent overthrow of the West all claim that they get their moral authority to do these things from the Quran. This is the painful truth that our President seems not to understand or ignores for convenience sake.

For our President to say in his speech at the mosque that Islam is a religion of peace and that Muslims keep us safe is beyond astonishing. While our President was giving his speech at this questionable mosque, Christians and non-Muslims all over the world were being raped, killed, and persecuted by those who follow the teachings of the Quran. The chances of me or anyone in my family being blown up, killed, or having their head cut off by a Catholic, Baptist, Methodist, Presbyterian or Anglican suicide bomber is zero. The chances of having any of that done to me by a Muslim is a much higher percentage. In fact, these things happen every day all over the world by Muslims. There is nothing in the Bible that calls for Christians or Jews to wage continual war on unbelievers. On the other hand, those radical jihadists all quote the Quran as the source for their vile and wicked actions.

Having said all of this, I am deeply disturbed that we are bringing into our country tens of thousands of people whose religion calls for the submission of every person and every other religion to Islam. Islam does not mean peace: it means “submission.” If we are told that we have nothing to fear from the arrival of this wave of Muslim refugees into our country —-think again. All we need to do is google Sweden, France, Germany, Denmark and read for yourself the the unbelievable spike in rape, violence, and crime in these countries perpetrated by these refugees. To make it even more clear, there are countless videos that have been posted by witnesses capturing the words, speeches and comments that these people are making as they wage a war of violence and intimidation on the host countries and populations where they have arrived. I travel to Europe many times each year on ministry trips. I also have many Europeans visit us here in the U.S. My friends and contacts have related to me the tragic accounts of what is taking place in their countries by these new refugee arrivals. I have seen with my own eyes what is taking place in many of the cities of Great Britain and mainland Europe. This is a very real problem and concern.

I encourage all Christians to pray for their Muslim neighbors. I encourage all Americans to treat Muslims with kindness and with Christian courtesy and civility. As Christians, we believe that all men are made in the image of God and have value and significance. We are taught by our Lord to love our neighbors. The arrival of Muslims in our country gives us an opportunity to tell them the good news of the gospel of Jesus Christ. But I warn all Americans to not be fooled or misled by the kind of speech that our President made in that mosque.

(For further information I would recommend reading “The Cry From Constantinople” by Angelo Christopholos. This can be purchased for your Kindle, Nook or iPhone.)
Posted by Robert Dickie at 4:24 PM No comments: