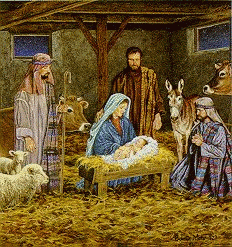 The Message Of Christmas

And it came to pass in those days that a decree went out from Caesar Augustus that all the world should be taxed. 2:2 (And this taxing was first made when Cyrenius was governor of Syria.) 2:3 And all went to be taxed, every one into his own city. 2:4 And Joseph also went up from Galilee, out of the city of Nazareth, into Judaea, unto the city of David, which is called Bethlehem; (because he was of the house and lineage of David:) 2:5 To be taxed with Mary his espoused wife, being great with child. 2:6 And so it was, that, while they were there, the days were accomplished that she should be delivered. 2:7 And she brought forth her firstborn son, and wrapped him in swaddling clothes, and laid him in a manger; because there was no room for them in the inn. 2:8 And there were in the same country shepherds abiding in the field, keeping watch over their flock by night. 2:9 And, lo, the angel of the Lord came upon them, and the glory of the Lord shone round about them: and they were sore afraid. 2:10 And the angel said unto them, Fear not: for, behold, I bring you good tidings of great joy, which shall be to all people. 2:11 For unto you is born this day in the city of David a Savior, which is Christ the Lord. 2:12 And this shall be a sign unto you; Ye shall find the babe wrapped in swaddling clothes, lying in a manger. 2:13 And suddenly there was with the angel a multitude of the heavenly host praising God, and saying, 2:14 Glory to God in the highest, and on earth peace, good will toward men.”


These fourteen verses in Luke’s gospel give us the amazing and mysterious events that surrounded the birth of Jesus in Bethlehem. The life of Christ is an entire unit and cannot be chopped up into little pieces and bits and isolated from the rest of His life. Every event in His history as the God-man is unique and important. But there are several events in the tapestry of his life that stand out from the rest as the main essentials of His life on earth as the Messiah. Those events would include His:

These four events are a concise adumbration of the entire activity of Jesus Christ the God-man. In our text found in Luke’s gospel we have the story of the birth of Jesus. This is one of the most beloved passages that we have in the four gospels. It just would not seem like Christmas if we did not read this precious text and ponder its relevance for our lives today.

Let me give a brief overview of the passage and then come to our theme and outline. First, in verses 1-3 we read of the decree of Caesar Augustus that all of the known world (under the Roman Empire’s influence) should be taxed. The word decree is from the Greek word dogma. It meant something had to be done. The authority of the Roman Empire stood behind that decree or command from Caesar. Four hundred silent years have come and gone since Jehovah had last spoken to His people through His prophets. Malachi was the last prophetic voice heard by the Lord’s people. Earlier in Hebrew history Daniel had made a marvelous prophecy that pin-pointed the exact year and time that the Jewish nation could expect to see the arrival of their Messiah. This prophecy was known as Daniel’s 70 Weeks. Those devout believers, who understood their Scriptures, were expecting the arrival of Messiah in or around the very time that Jesus was actually born. Even though the godly scholars and believers among the Jews were expecting their Messiah they did not know the details of all that would surround this blessed event. Long before the decree of Caesar went forth that demanded all people to return to the city of their birth to be taxed a decree went out from the throne room of heaven mandating that the Messiah would be born in Bethlehem. The rise and domination of the Roman Empire was not a mere coincidence. The Roman Empire was ordained by God to be the instrument that would play a key role in the birth and the death of God’s own Son Jesus Christ.

Second, we see in verses 4-6 Joseph and Mary made their way to the city of David, Bethlehem, to be taxed. Galilee was in the North parts of Israel. Joseph was described as going up to Bethlehem because Bethlehem was at a higher elevation than Galilee. The journey to Bethlehem was about 60 or 70 miles by way the crow flies. Bethlehem is a prophetic city of importance. Micah 5:2 gave us this wonderful Messianic promise, “But thou, Bethlehem Ephratah, though thou be little among the thousands of Judah, yet out of thee shall he come forth unto me that is to be ruler in Israel; whose goings forth have been from of old, from everlasting.”

In verse 7 we are told of the birth of Jesus in more vivid detail. Mary gave birth to her son in a barn or stall where cattle were kept and fed. There was no room for them in the inn. Joseph being a poor carpenter and not being any one of prominence was not given any help or assistance. Joseph had to find the best spot in the barn and stall that he could and then assisted his wife Mary in delivering the Christ child. The baby was wrapped in swaddling clothes, i.e. Dirty rags. This itself was fulfilling the ancient prophecy that Messiah would be of humble and lowly birth. How ominous is the statement that there was no room for them in the inn. Is there any room for Jesus in your:

Never forget that the baby in this manger was not just another man-child. This baby was the Creator of the ends of the earth. This was the One who gave the lion his roar, the leopard his spots, the elephant his trunk, the zebra his stripes, the robin his song, the flower its beauty and who made the sun, moon and the stars and hung all of the planets in space. This child was encapsulated Deity.

Third, in verses 8-9 we see in the nearby fields there were shepherds who were keeping watch over their sheep by night. Suddenly, out of nowhere appeared the angel of the Lord in the skies above these lowly shepherds. The blazing glory of Yahweh shined all around the angels and this caused a deep reverential fear to overcome these humble men.


In verses 10-12 the angels make a wonderful announcement to these lowly sheep herders. “And the angel said unto them, Fear not: for, behold, I bring you good tidings of great joy, which shall be to all people. 2:11 For unto you is born this day in the city of David a Savior, which is Christ the Lord.” This was a gracious announcement. It was not the sound of alarm of impending doom. It was the joyful news to announce the arrival of God’s Christmas gift. “For unto you…” What precious words these are. The announcement was that there was good tidings of great joy that shall be to all people (Not just Jews, but people of all races, nations, languages, and ethnic backgrounds). The angelic announcement was very specific. It announced the birth of the Savior who was the promised Jewish Messiah. There were three key words in this angelic announcement.

The message also told these men that they would find the Christ child in a manger wrapped in swaddling clothes.

Finally, in verses 13-14, the angels burst out in the first Christmas carol and sing praises to the new born king.

This is a brief but good summary of the message of Christmas. I trust all of you will have a wonderful Christmas this year. You are all in our prayers and Mary and I, and Eric and Lori pray for our church family during this season.

We love you all!!! Have a merry Christmas!!

Yours in Christ, Pastor Bob
Posted by Pastor Robert L. Dickie at 6:12 PM

Thank you for the introduction to Mark Alexander's Patriot Post. He has some neat stuff.