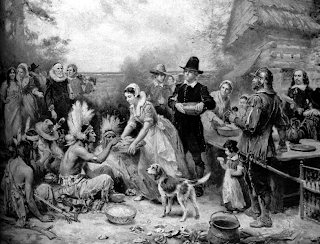 Praying for you all to have a wonderful Thanksgiving this year!!!

Let me take a moment to wish all of you a wonderful thanksgiving this year. We have much to be thankful for. Yes, many Americans are uncertain about the future because of the financial crisis and because of the sad election results that put into office as the president of the United States the most liberal, inexperienced man ever elected. A man who has supported partial birth abortion and seems to take sides with every thing that we as Christians would oppose and find morally appalling.

I came across this article today that I thought I would pass on to all of you. I trust it will be a blessing and a challenge to each of you. This article was written by Mark Alexander the editor of the Patriot Post on the Internet.

“In the aftermath of a momentous election, an election sure to change the course of our nation, it is tempting to despair. On this Thanksgiving, though, let us resist that powerful temptation and instead take stock of the blessings of liberty.

President Ronald Reagan often cited the Pilgrims who celebrated the first Thanksgiving as our forebears who charted the path of American freedom. He made frequent reference to John Winthrop's "shining city upon a hill."

As Reagan explained, "The phrase comes from John Winthrop, who wrote it to describe the America he imagined. What he imagined was important because he was an early Pilgrim, an early freedom man. He journeyed here on what today we'd call a little wooden boat; and like the other Pilgrims, he was looking for a home that would be free."

Who were these "freedom men," and how did they eventually blaze the path of true liberty? They were Calvinist Protestants who rejected the institutional Church of England, believing that worshipping God must originate freely in the individual soul, without coercion. Suffering persecution and imprisonment in England for their beliefs, a group of these separatists fled to Holland in 1608. There, they found spiritual liberty in the midst of a disjointed economy that failed to provide adequate compensation for their labors, and a dissolute, degraded, corrupt culture that tempted their children to stray from faith.

Determined to protect their families from such spiritual and cultural dangers, the Pilgrims left Plymouth, England, on 6 September 1620, sailing for a new world that offered the promise of both civil and religious liberty. After an arduous journey, they dropped anchor off the coast of what is now Massachusetts.

On 11 December 1620, prior to disembarking at Plymouth Rock, they signed the Mayflower Compact, America's original document of civil government. It was the first to introduce self-government, and the foundation on which the Declaration of Independence and the Constitution were built. Governor William Bradford described the Compact as "a combination ... that when they came a shore they would use their owne libertie; for none had power to command them."
Upon landing, the Pilgrims conducted a prayer service and quickly turned to building shelters. Under harrowing conditions, the colonists persisted through prayer and hard work, reaping a bountiful summer harvest. But their material prosperity soon evaporated, for the Pilgrims had erred in acquiescing to their European investors' demands for a financial arrangement holding all crops and property in common, in order to return an agreed-to half to their overseas backers.
By 1623, however, Plymouth Colony was near failure as a result of famine, blight and drought, as well as excessive taxation and what amounted to forced collectivization.

In desperation, the Pilgrims set a day for prayers of repentance; God answered, delivering a gentle rainfall by evening. Bradford's diary recounts how the colonists repented in action: "At length, after much debate of things, the Governor (with the advice of the chiefest amongst them) gave way that they should set corn every man for his own particular, and in that regard trust to themselves; in all other things to go in the general way as before. And so assigned to every family a parcel of land, according to the proportion of their number."

Property ownership and families freely laboring on their own behalf replaced the "common store," but only after their ill-advised experiment with communism nearly wiped out the entire settlement.

In their simple representative government, born out of dedication to religious freedom, the Pilgrims replaced the rule of men -- with its arbitrary justice administered capriciously at the whim of rulers who favor some at the expense of others -- with the rule of law, treating individuals equally. Yet even these "freedom men" strayed under straits. So could we, if we revert to materialistic government reliance instead of grateful obedience to God. Sadly, we're a long way down that path already.

God bless you all and have a great Thanksgiving!