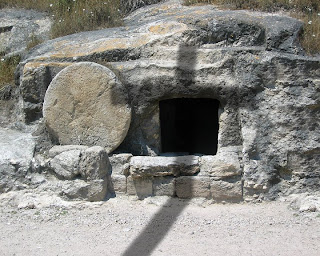 I want to wish all of you a wonderful Easter!
Here is an outline of an Easter Message that I gave to the church last year. I trust it will be a blessing to all of you.
Why Seek Ye The Living Among The Dead?

The resurrection is the crowning proof of the deity of Christ. It is this great doctrine that separates everything else from Christianity. We have often stated that if the resurrection had not taken place there would be no gospel. The importance of the resurrection can be stated by the following points:

The Arrogance Of Unbelief

When we attempt to share our faith in the Deity of Christ and in His resurrection, we find that many people have a deep-seated bias and hatred towards the gospel. They often oppose the Christian faith without really considering the evidence for it. For example, if we asked some of these people questions such as, “Do you know why we believe the Bible to be true?” or “Do you know why the Bible alone is the Word God?” or “Do you know what the evidence is for the resurrection of Christ?”-- these people would, for the most part, have to answer “No.” And many times they display a rudeness, arrogance, and contempt for the Christian faith that is hard to explain, except that there is this deep-seated bias and prejudice against it. This reminds me of a story I once read about a lion in Africa who went around to all the other animals asking, “Who is the king of the jungle?” The story goes like this: A lion in Africa went up to the big, fat hippo and said, “Who is the king of the jungle?” and the big fat hippo replied, “You are of course!” And the lion went over to the giraffe and said, “Who is the king of the jungle?” and the giraffe replied and said, “You are, O mighty lion.” Then the lion went over to the baboons and said, “Do you know who the king of the jungle is?” and the baboons all stood still trembling in their tracks and said, “You are, O great one of the jungle.” And the lion went over to the big rhino and said, “Who is the king of the jungle?” and the rhino replied, “We all know that you are, O mighty lion!” And finally, the lion went over to a big elephant that was walking along the river where the trees and water meet, and the lion said to the elephant, “Who is the king of the jungle?” And the elephant reached down with his long trunk and wrapped it around the lion and picked him up and slammed the lion against one tree and then another. Then the elephant slammed the lion to the ground and dragged him all around in the dirt, and then picked him up again and slammed him back into the trees again. Then he threw the lion back down on the ground and slammed the lion up and down in the dirt. Finally, the elephant picked the lion up and threw him into the river. The lion came out of the river all wet, humbled, and very subdued. He shook off the water, got his bearings. and then said to the elephant, “Hey! Just because you don’t know the answer to the question you don’t have to be rude about it!” I understand that for many people, who are not Christians, there is arrogance in their unbelief. This arrogance is very hard to understand since they have not considered the evidence for the gospel of Jesus Christ. This arrogance is just biased unbelief.

In our text this morning, we have the statement from the angel, “Why seek you the living among the dead?” In this account by Luke, the women came to the tomb of Jesus very early in the morning with spices that they had hoped to use to pour on the Lord’s body. When they arrived, they found the stone rolled away and the tomb empty. As the women stood near the tomb very perplexed, two angels appeared to them and asked this great question, “Why seek ye the living among the dead?” This is a very relevant question for everyone to ask themselves, as well. This is the question with two options. These two choices or options are open for all of us to choose.

Our Theme: The Questions With Two Choices

I. Choice One: Seek Christ, The Risen Savior, And You Find Life
II. Choice Two: Seek The Dead And Find Death


I. Choice One: Seek Christ The Risen Savior And You Find Life

A. Jesus Christ is the risen and the living Son of God.

2. Why would the early Christians tell their opponents, as did the Apostle Paul, that this was most crucial point of Christian evidence? By doing this they left themselves open to attack at precisely that very point. Of course the answer is that they had certainty that the resurrection can stand the scrutiny of all and any enemies.

B. Christ, as the risen Savior provides life for each of those who come to Him by faith.

1. Abundant life- John 10:10, “…I am come that ye might have life and have it more abundantly.”
2. Spiritual life- John 20:31, “But these are written, that ye might believe that Jesus is the Christ, the Son of God; and that believing ye might have life through his name.”
3. Eternal life-I John 5:11-12, “And this is the record, that God hath given to us eternal life, and this life is in his Son. He that hath the Son hath life; and he that hath not the Son of God hath not life.”

C. Those who seek Christ find this life.

A. The women in our text made a serious mistake; they sought Christ in an empty tomb.

B. Those who make a similar mistake find death.
1. Any religion or philosophy that has no Christ has no hope of offering spiritual life to those
who seek life there.
2. These religions and philosophies are just empty tombs where only death and despair can
be found.

C. There is only one way to heaven and to eternal life.

1. It is Jesus Christ.
2. Jesus said, “I am the way the truth and the life. No man cometh unto the Father but by
me.”

D. The bottom line is this—anti-Christian philosophies and religions only produce death.

1. They are based on dead works that cannot satisfy either the law or the justice of God.
2. They are based on dead ideas that have had their origin in men rather than in God.
3. And how about many churches that are dead? Jesus warned against the dead and corrupt
teachings of the Pharisees. "Woe unto you, scribes and Pharisees, hypocrites! for ye are
like unto whited sepulchers, which indeed appear beautiful outward, but are within full of
dead men's bones, and of all uncleanness" Mat 23:27. Any church that has departed from
teaching the gospel of justification by faith alone is a dead church. Any church that does
not have a pastor who is filled with the Spirit is a dead church just like this whitened
sepulcher that Jesus mentions here.

4. There are denominations that are dead. This is because they have left the historic
Christian faith long ago.

5. There are seminaries that are dead. In many of these places they kill the prophets and
bury the word. They are not seminaries but cemeteries.

Paster,
Last weekend we were traveling and wanted to plug into a church that worshped the same way that we do at Berean. This turned out harder than I thought. I was wondering if there is any way to get a list of churches across the country that fit.
Thanks J.J. and April Goidosik

Arrogance of unbelief is painful to listen to. I have many blog discussions with friends of mine who, no matter how sincere I am, return answers full of sarcasm and blasphemy.